Mnajdra (Maltese: L-Imnajdra) is a megalithic temple complex found on the southern coast of the Mediterranean island of Malta. Mnajdra is approximately 500 metres from the Ħaġar Qim megalithic complex. Mnajdra was built around the fourth millennium BCE; the Megalithic Temples of Malta are among the most ancient religious sites on Earth, described by the World Heritage Sites committee as "unique architectural masterpieces." In 1992 UNESCO recognized the Mnajdra complex and four other Maltese megalithic structures as UNESCO World Heritage Sites. In 2009 work was completed on a protective tent. 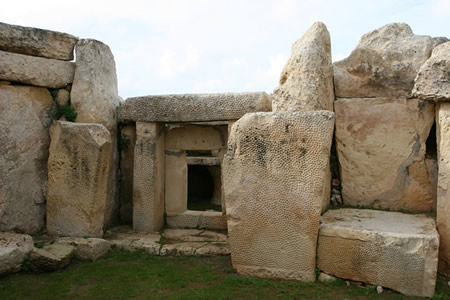 Mnajdra is made of coralline limestone, which is much harder than the soft globigerina limestone of Ħaġar Qim. The main structural systems used in the temples are corbelling with smaller stones, and post and lintel construction using large slabs of limestone.

The cloverleaf plan of Mnajdra appears more regular than that of Ħagar Qim, and seems reminiscent of the earlier complex at Ggantija. The prehistoric structure consists of three conjoined but not connected temples: the upper, middle and lower.

The upper temple is the oldest structure in the Mnajdra complex and dates to the Ggantija phase (3600-3200 BC). It is a three-apsed building, the central apse opening blocked by a low screen wall. The pillar-stones were decorated with pitmarks drilled in horizontal rows on the inner surface.

The middle temple was built (or possibly rebuilt) in the late Tarxien phase (3150 – 2500 BC), the main central doorway of which is formed by a hole cut into a large piece of limestone set upright, a type of construction typical of other megalithic doorways in Malta. This temple appears originally to have had a vaulted ceiling, but only the base of the ceiling now remain on top of the walls and, in fact, is the most recent structure. It is formed of slabs topped by horizontal courses.

The lowest temple, built in the early Tarxien phase, is the most impressive and possibly the best example of Maltese megalithic architecture. It has a large forecourt containing stone benches, an entrance passage covered by horizontal slabs, one of which has survived, and the remains of a possibly domed roof. The temple is decorated with spiral carvings and indentations, and pierced by windows, some into smaller rooms and one onto an arrangement of stones. 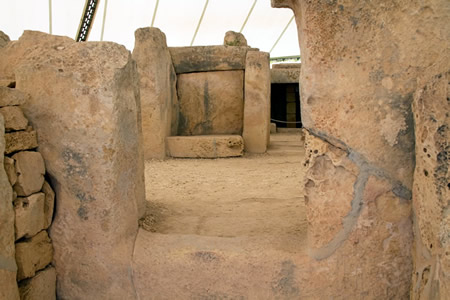 The lowest temple is astronomically aligned and thus was probably used as an astronomical observation and/or calendrical site. On the vernal and the autumnal equinox sunlight passes through the main doorway and lights up the major axis. On the solstices sunlight illuminates the edges of megaliths to the left and right of this doorway.

Although there are no written records to indicate the purpose of these structures, archaeologists have inferred their use from ceremonial objects found within them: sacrificial flint knives and rope holes that were possibly used to constrain animals for sacrifice (since various animal bones were found). These structures were not used as tombs since no human remains were found. The temples contain furniture such as stone benches and tables that give clues to their use. Many artifacts were recovered from within the temples suggesting that these temples were used for religious purposes, perhaps to heal illness and/or to promote fertility.

Recent research shows that this was primarily a solar year calendar and astronomical observatory. The design, based on the principle of the camera obscura, was the result of long evolution from the earliest archaic design, such as the small unit at the site. The image of the sunrise was translated mathematically into a linear passage of days. In the archaic design this was done in the central apse which converted sinusoidal movement of the image of the sunrise on the horizon into a linear progression. In the evolved design the solstice stone translated sinusoidal movement into linear directly and more accurately. Besides calendric information, the later design was found to enable forecasting of the solstice date (and hour) with surprising accuracy.


The excavations of the Mnajdra temples were performed under the direction of J.G. Vance in 1840, one year after the discovery of Ħagar Qim. In 1871, James Fergusson designed the first plan of the megalithic structure. The plan was quite inaccurate and hence in 1901, Dr. Albert Mayr made the first accurate plan which was based on his findings. In 1910, Dr. Thomas Ashby performed further investigations which resulted in the collection of the important archaeological material. Further excavations were performed in December 1949, in which two small statues, two large bowls, tools and one large spherical stone, which was probably used to move the temple's large stones, were discovered. 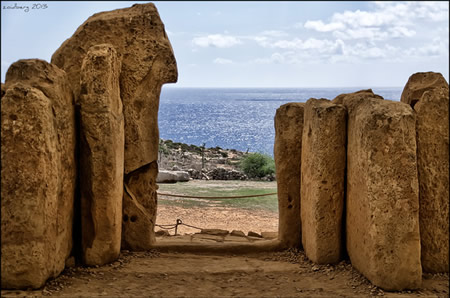 Mnajdra was vandalized on 13 April 2001, when at least three people armed with crowbars toppled or broke about 60 megaliths, and inscribed graffiti on them. The attack was called "the worst act of vandalism ever committed on the island of Malta" by UNESCO. The damage to the temples was initially considered as irreparable, but they were restored using new techniques making it difficult to tell where the megaliths had been damaged. The temples were reopened to the public in 2002.

The 1, 2 and 5 cent Maltese euro coins, minted since 2008, bear a representation of the Mnajdra temples on their obverse side.

A protective shelter was constructed around Mnajdra (along with Ħaġar Qim) in 2009.