The Giza Pyramid Complex ("Pyramids of Giza") is an archaeological site on the Giza Plateau, on the outskirts of Cairo, Egypt. 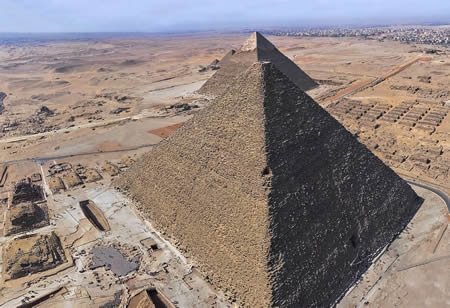 This complex of ancient monuments includes the three pyramid complexes known as the Great Pyramids, the massive sculpture known as the Great Sphinx, several cemeteries, a workers' village and an industrial complex. It is located in the Libyan Desert, approximately 9 km (5 mi) west of the Nile river at the old town of Giza, and about 13 km (8 mi) southwest of Cairo city centre.

The pyramids, which have historically loomed large as emblems of ancient Egypt in the Western imagination, were popularised in Hellenistic times, when the Great Pyramid was listed by Antipater of Sidon as one of the Seven Wonders of the World. It is by far the oldest of the ancient Wonders and the only one still in existence.

The Pyramids of Giza consist of the Great Pyramid of Giza (also known as the Pyramid of Cheops or Khufu and thought to be constructed c. 2560–2540 BC), the somewhat smaller Pyramid of Khafre (or Chephren) a few hundred meters to the south-west, and the relatively modest-sized Pyramid of Menkaure (or Mykerinos) a few hundred meters farther south-west. The Great Sphinx lies on the east side of the complex. Current consensus among Egyptologists is that the head of the Great Sphinx is that of Khafre. Along with these major monuments are a number of smaller satellite edifices, known as "queens" pyramids, causeways and valley pyramids.

Khufu’s pyramid complex consists of a valley temple, now buried beneath the village of Nazlet el-Samman; basalt paving and nummulitic limestone walls have been found but the site has not been excavated. The valley temple was connected to a causeway which was largely destroyed when the village was constructed. The causeway led to the Mortuary Temple of Khufu. From this temple the basalt pavement is the only thing that remains. The mortuary temple was connected to the king’s pyramid. The king’s pyramid has three smaller queen’s pyramids associated with it and five boat pits. The boat pits contained a ship, and the 2 pits on the south side of the pyramid still contained intact ships. One of these ships has been restored and is on display. Khufu's pyramid still has a limited collection of casing stones at its base. These casing stones were made of fine white limestone quarried from the nearby range. 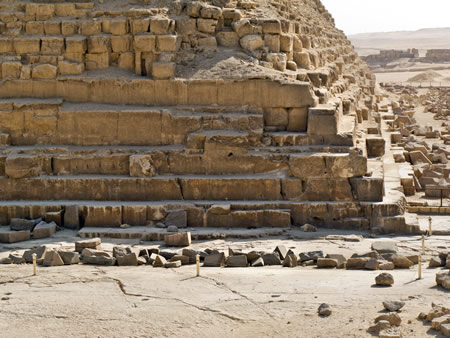 Khafre’s pyramid complex consists of a valley temple, the Sphinx temple, a causeway, a mortuary temple and the king’s pyramid. The valley temple yielded several statues of Khafre. Several were found in a well in the floor of the temple by Mariette in 1860. Others were found during successive excavations by Sieglin (1909–10), Junker, Reisner, and Hassan. Khafre’s complex contained five boat-pits and a subsidiary pyramid with a serdab. Khafre's pyramid appears larger than the adjacent Khufu Pyramid by virtue of its more elevated location, and the steeper angle of inclination of its construction—it is, in fact, smaller in both height and volume. Khafre's pyramid retains a prominent display of casing stones at its apex.

Menkaure’s pyramid complex consists of a valley temple, a causeway, a mortuary temple, and the king’s pyramid. The valley temple once contained several statues of Menkaure. During the 5th dynasty, a smaller ante-temple was added on to the valley temple. The mortuary temple also yielded several statues of Menkaure. The king’s pyramid has three subsidiary or queen’s pyramids. Of the four major monuments, only Menkaure's pyramid is seen today without any of its original polished limestone casing.

The Sphinx is theorized to date from the reign of king Khafre. During the New Kingdom, Amenhotep II dedicated a new temple to Hauron-Haremakhet and this structure was added onto by later rulers.

Tomb of Queen Khentkaus I

Khentkaus I was buried in Giza. Her tomb is known as LG 100 and G 8400 and is located in the Central Field, near the valley temple of Menkaure. The pyramid complex of Queen Khentkaus includes: her pyramid, a boat pit, a valley temple and a pyramid town.


Most construction theories are based on the idea that the pyramids were built by moving huge stones from a quarry and dragging and lifting them into place. The disagreements center on the method by which the stones were conveyed and placed and how possible the method was. 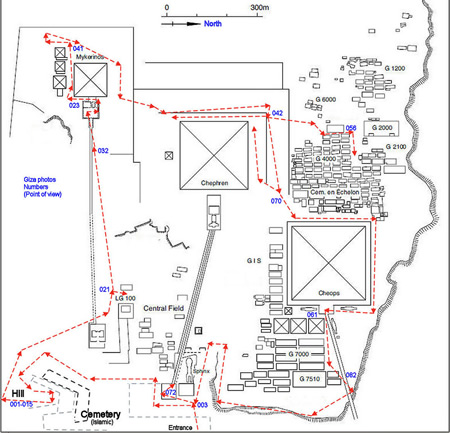 In building the pyramids, the architects might have developed their techniques over time. They would select a site on a relatively flat area of bedrock—not sand—which provided a stable foundation. After carefully surveying the site and laying down the first level of stones, they constructed the pyramids in horizontal levels, one on top of the other.

For the Great Pyramid of Giza, most of the stone for the interior seems to have been quarried immediately to the south of the construction site. The smooth exterior of the pyramid was made of a fine grade of white limestone that was quarried across the Nile. These exterior blocks had to be carefully cut, transported by river barge to Giza, and dragged up ramps to the construction site. Only a few exterior blocks remain in place at the bottom of the Great Pyramid. During the Middle Ages (5th century to 15th century), people may have taken the rest away for building projects in the city of Cairo.

To ensure that the pyramid remained symmetrical, the exterior casing stones all had to be equal in height and width. Workers might have marked all the blocks to indicate the angle of the pyramid wall and trimmed the surfaces carefully so that the blocks fit together. During construction, the outer surface of the stone was smooth limestone; excess stone has eroded as time has passed. 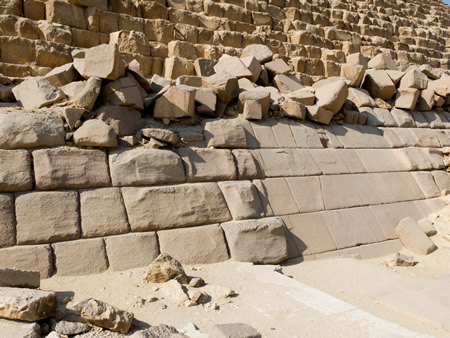 The pyramids of Giza and others are thought to have been constructed to house the remains of the deceased Pharaohs who ruled over Ancient Egypt. A portion of the Pharaoh's spirit called his ka was believed to remain with his corpse. Proper care of the remains was necessary in order for the "former Pharaoh to perform his new duties as king of the dead." It's theorized the pyramid not only served as a tomb for the Pharaoh, but also as a storage pit for various items he would need in the afterlife. "The people of Ancient Egypt believed that death on Earth was the start of a journey to the next world. The embalmed body of the King was entombed underneath or within the pyramid to protect it and allow his transformation and ascension to the afterlife."

The work of quarrying, moving, setting, and sculpting the huge amount of stone used to build the pyramids might have been accomplished by several thousand skilled workers, unskilled laborers and supporting workers. Bakers, carpenters, water carriers, and others were also needed for the project. Along with the methods utilized to construct the pyramids, there is also wide speculation regarding the exact number of workers needed for a building project of this magnitude. When Greek historian Herodotus visited Giza in 450 BC, he was told by Egyptian priests that "the Great Pyramid had taken 400,000 men 20 years to build, working in three-month shifts 100,000 men at a time." Evidence from the tombs indicates that a workforce of 10,000 laborers working in three-month shifts took around 30 years to build a pyramid. 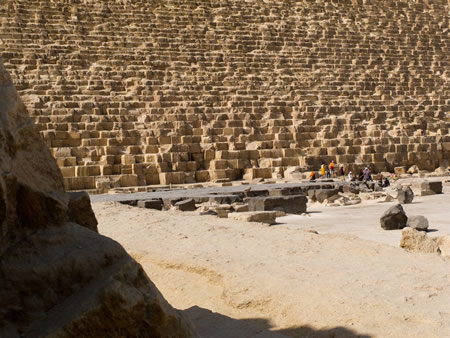 The Giza pyramid complex is surrounded by a large stone wall, outside which Mark Lehner and his team discovered a town where the pyramid workers were housed. The village is located to the southeast of the Khafre and Menkaure complexes. Among the discoveries at the workers' village are communal sleeping quarters, bakeries, breweries, and kitchens (with evidence showing that bread, beef, and fish were staples of the diet), a hospital and a cemetery (where some of the skeletons were found with signs of trauma associated with accidents on a building site). The workers' town appears to date from the middle 4th dynasty (2520–2472 BC), after the accepted time of Khufu and completion of the Great Pyramid. According to Lehner and the AERA team;

"The development of this urban complex must have been quite rapid. All of the construction probably happened in the 35 to 50 years that spanned the reigns of Khafre and Menkaure, builders of the Second and Third Giza Pyramids".

Without carbon dating, using only pottery shards, seal impressions, and stratigraphy to date the site, the team further concludes;

"The picture that emerges is that of a planned settlement, some of the world's earliest urban planning, securely dated to the reigns of two Giza pyramid builders: Khafre (2520–2494 BC) and Menkaure (2490–2472 BC)".