Dendera Temple complex (Ancient Egyptian: Iunet or Tantere; the 19th-century English spelling in most sources, including Belzoni, was Tentyra) is located about 2.5 kilometres (1.6 mi) south-east of Dendera, Egypt. It is one of the best-preserved temple complexes in Egypt. The area was used as the sixth Nome of Upper Egypt, south of Abydos.

The whole complex covers some 40,000 square meters and is surrounded by a hefty mud brick enclosed wall. Dendera was a site for chapels or shrines from the beginning of history of ancient Egypt. It seems that pharaoh Pepi I (ca. 2250 BC) built on this site and evidence exists of a temple in the eighteenth dynasty (ca 1500 BC). However, the earliest extant building in the compound today is the Mammisi raised by Nectanebo II – last of the native pharaohs (360–343 BC). The features in the complex include:

The all overshadowing building in the Complex is the main temple, namely Hathor Temple (historically called the Temple of Tentyra). The temple has been modified on the same site starting as far back as the Middle Kingdom, and continuing right up until the time of the Roman emperor Trajan. The existing structure was built no later than the late Ptolemaic period. The temple, dedicated to Hathor, is one of the best preserved temples in all Egypt. Subsequent additions were added in Roman times. 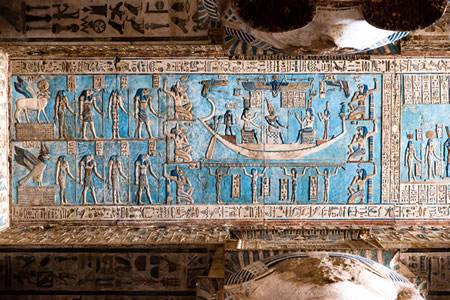 Layout elements of the temple:

Depictions of Cleopatra VI which appear on temple walls are good examples of Ptolemaic Egyptian art. On the rear of the temple exterior is a carving of Cleopatra VII Philopator (the popularly well known Cleopatra) and her son, Ptolemy XV Philopator Philometor Caesar (Caesarion), fathered by Julius Caesar.

The Dendera necropolis is a series of mastaba tombs. The necropolis dates from the Early Dynastic Period of the Old Kingdom to the First Intermediate Period of Egypt. The necropolis runs the eastern edge of the western hill and over the northern plain. The subterranean Hathor temple tombs total 12 chambers. Some reliefs are dated to as late as the Ptolemy XII Neos Dionysos reign. The crypts reportedly were used for storing vessels and divine iconography. An opening in the "Flame Room" floor leads to a narrow chamber with representations on the walls of the objects which were kept in them. In the second chamber, a relief depicts Pepi I. He offers a statuette of the god Ihy to four images of Hathor. In the crypt, reached from the "throne room", Ptolemy XII has jewelry and offerings for the gods.

Hathor Temple has a relief sometimes known as the Dendera light because of a controversial thesis about its nature. The Dendera light images comprise five stone reliefs (two of which contain a pair of what some theorists refer to as lights) in the Hathor temple at the Dendera Temple complex located in Egypt. The view of Egyptologists is that the relief is a mythological depiction of a djed pillar and a lotus flower, spawning a snake within, representing aspects of Egyptian mythology.

In contrast to this interpretation, there is analternate suggestion that it is actually a representation of an Ancient Egyptian lightbulb.