Abu Rawash (also spelled Abu Roach, Abu Roash), 8 km to the North of Giza, is the site of Egypt's most northerly pyramid, also known as the lost pyramid — the mostly ruined Pyramid of Djedefre, the son and successor of Khufu. Originally, it was thought that this pyramid had never been completed, but the current archaeological consensus is that not only was it completed, but that it was built about the same size as the Pyramid of Menkaure – the third largest of the Giza pyramids. One notable fact about the pyramid at Abu Roash is that the upper most part of the pyramid has seemingly disappeared, revealing the internal passage that runs down into the bedrock. Explanations to why this pyramid is missing its top vary. The second point of interest that this pyramid provides is that it is built on top of a hillock. The builders faced the colossal task of not only hauling megalithic stones up a pyramid but also up a hillock.

Its location adjacent to a major crossroads made it an easy source of stone. Quarrying — which began in Roman times — has left little apart from a few courses of stone superimposed upon the natural hillock that formed part of the pyramid's core. 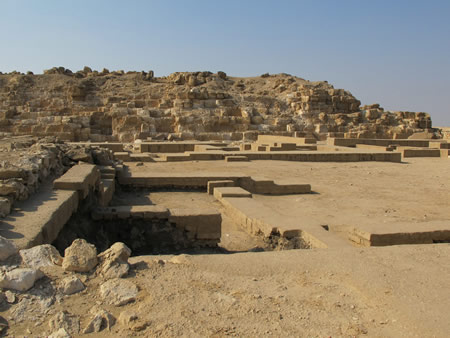 The Pyramid of Djedefre consists today mostly of ruins located at Abu Rawash in Egypt. It is Egypt's most northerly pyramid, and is believed to have been built by Djedefre, son and successor to king Khufu. Though some Egyptologists in the last few decades have suggested otherwise, recent excavations at Abu Rawash carried out by Dr. Michael Baud of the Louvre Museum in Paris suggest the pyramid was in fact never finished. If completed, however, it is suggested to have been about the same size as the Pyramid of Menkaure — the third largest of the Giza pyramids. It is believed to have originally been the most beautiful of the pyramids, with an exterior of polished, imported granite, limestone and crowned with a large pyramidion. It is also believed for this reason the completed pyramid was largely deconstructed by the Roman Empire to build their own construction projects after the conquest of Egypt under Roman Emperor Augustus. The pyramid's ancient name was "Djedefre's Starry Sky".

According to the documentary "The Lost Pyramid," aired by the History Channel, the pyramid may actually have been the highest ever built at 722 feet (about 240 feet taller than the Great Pyramid of Giza's 481 feet although this is due to its elevated location rather than the pyramid's estimated actual height of 220 feet). It is believed that the pyramid was actually destroyed, though it is unclear why. It is speculated that Djedefre was an unpopular ruler. 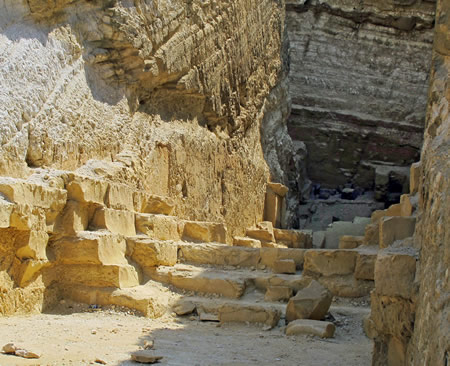 Miroslav Verner wrote in 'The Pyramids'; "The destruction started at the end of the New Kingdom at the latest, and was particularly intense during the Roman and early Christian eras when a Coptic monastery was built in nearby Wadi Karin. It has been proven, moreover, that at the end of the nineteenth century, stone was still being hauled away at the rate of three hundred camel loads a day"

Djedefre's pyramid was architecturally different from those of his immediate predecessors in that the chambers were beneath the pyramid instead of inside. The pyramid was built over a natural mound and the chambers were created using the 'pit and ramp' method, previously used on some mastaba tombs. Djedefre dug a pit 21m x 9m and 20m deep in the natural mound. A ramp was created at an angle of 22º35' and the chambers and access passage were built within the pit and on the ramp. Once the 'inner chambers' were finished, the pit and ramp were filled in and the pyramid built over the top. This allowed the chambers to be made without tunneling, and avoided the structural complications of making chambers within the body of the pyramid itself. He also reverted to an earlier style of construction by creating a rectangular enclosure wall oriented north-south, similar to those of Djoser and Sekhemkhet. Several Pyramids and Sun Temples were built over natural mounds; utilising these may have been a way of shortening the actual work required, although the mound may have been symbolic of the Primaeval Mound of the Egyptian Creation mythology.