The Treasury of Atreus or Tomb of Agamemnon is a large "tholos" tomb on the Panagitsa Hill at Mycenae, Greece, constructed during the Bronze Age around 1250 BC. The lintel stone above the doorway weighs 120 tons, with approximate dimensions 8.3 x 5.2 x 1.2m, the largest in the world. The tomb was used for an unknown period. Mentioned by Pausanias, it was still visible in 1879 when the German archeologist Heinrich Schliemann discovered the shaft graves under the 'agora' in the Acropolis at Mycenae. The tomb has probably no relationship with either Atreus or Agamemnon, as archaeologists believe that the sovereign buried there ruled at an earlier date than the two; it was named thus by Heinrich Schliemann and the name has been used ever since.

The tomb perhaps held the remains of the sovereign who completed the reconstruction of the fortress or one of his successors. The grave is in the style of the other tholoi of the Mycenaean World, of which there are nine in total around the citadel of Mycenae and many more in the Argolid. However, in its monumental shape and grandeur it is one of the most impressive monuments surviving from Mycenaean Greece. 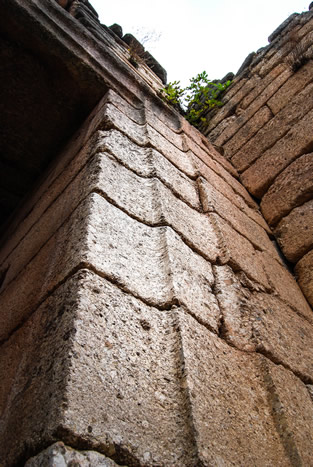 The tomb is excavated into the side of a hill. It is formed of a semi-subterranean room of circular plan, with a corbel arch covering that is ogival in section. With an interior height of 13.5m and a diameter of 14.5m, it was the tallest and widest dome in the world for over a thousand years until construction of the Temple of Hermes in Baiae and the Pantheon in Rome. Great care was taken in the positioning of the enormous stones, to guarantee the vault's stability over time in bearing the force of compression from its own weight. This gave a perfectly smoothed internal surface, onto which could be placed gold, silver and bronze decoration. The room was constructed by digging vertically into the hillside, like a well, and then walling and roofing the space with stone from the floor level of the chamber, and finally back-filling the earth above. Tiers of ashlar masonry were laid in rings so that each successive tier projected slightly farther inward, until only a small opening is left at the top. Above the entryway there is an open space in the shape of a triangle. This space, which is known as a relieving triangle, is meant to funnel the weight of the structure off the lintel and into the sides of the structure, preventing the lintel from breaking due to pressure.

The tholos was entered from an inclined uncovered hall or dromos, 36 meters long and with dry-stone walls. A short passage led from the tholos chamber to the actual burial chamber, which was dug out in a nearly cubical shape.

The entrance portal to the tumulus was richly decorated: half-columns in green limestone with zig-zag motifs on the shaft, a frieze with rosettes above the architrave of the door, and spiral decoration in bands of red marble that closed the triangular aperture above an architrave. Segments of the columns and architraves were removed by Lord Elgin in the early nineteenth century and are now in the British Museum. The capitals are influenced by ancient Egyptian examples; one is in the Pergamon Museum in Berlin as part of the Antikensammlung Berlin. Other decorative elements were inlaid with red porphyry and green alabaster, a surprising luxury for the Bronze Age.