Gunung Padang is a megalithic site located in Karyamukti village, Cianjur regency, West Java Province of Indonesia, 50 km southwest of the city of Cianjur or 6 kilometers from Lampegan station. It has been called the largest megalithic site in all of Southeastern Asia, and has produced carbon dating results which, if confirmed, suggest it is extraordinarily old. The survey believes that Gunung Padang was built in four different eras.

The existence of the site was mentioned in Rapporten van de Oudheidkundige Dienst (ROD, "Report of the Department of Antiquities") in 1914. The Dutch historian N. J. Krom also mentioned it in 1949. Employees of the National Archeology Research Centre visited the site in 1979 for a study of its archaeology, history, and geology.

Located at 885 metres above sea level, the site covers a hill in a series of terraces bordered by retaining walls of stone that are accessed by about 400 successive andesite steps rising about 95 metres. It is covered with massive rectangular stones of volcanic origin. The Sundanese people consider the site sacred and believe it was the result of King Siliwangi's attempt to build a palace in one night. The asymmetric Punden Berundak faces northwest, to Mount Gede and was constructed for the purpose of worship. Based on various dating techniques, the site was completed by 5000 BC and quite likely much earlier.

The villages closest to the site are Cimanggu, Ciwangun and Cipanggulakan. Two possible routes to access the site are:

At the end of June 2014, the Education and Culture Ministry stated that Gunung Padang Megalithic Site as National Site Area with 29 hectares area. 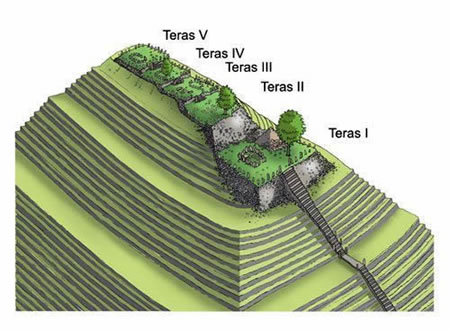 On October 1, 2014, surveyors halted excavation activities temporarily due to these facts and recommendations:

The 2014 excavation has been criticized for being improperly conducted.

A survey conducted in 2012 showed the following:

Thirty-four Indonesian scientists signed a petition questioning the motives and methods of the Hilman-Arif team. Vulcanologist Sutikno Bronto states that the site is the neck of an ancient volcano and not a man-made pyramid. An unnamed archaeologist suggests that the Hilman-Arif team has "created a civilisation around the period to explain their finding".