The San Agustín Archaeological Park (Spanish: Parque Arqueológico de San Agustín) is an archaeological site located near the town of San Agustín in Huila Department in Colombia. The site contains the largest collection of religious monuments and megalithic sculptures in Latin America and is considered the world's largest necropolis. It was declared a UNESCO World Heritage Site in 1995. 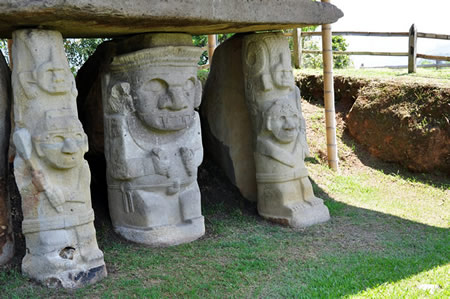 The statues were first described by a Spanish monk, Fray Juan de Santa Gertrudis (1724–1799), who visited the countries of Colombia (then part of the New Kingdom of Granada), Ecuador and Peru in 1756–57 as a missionary. He passed through San Agustín in mid-1756, and wrote about the statues in his four-volume work Maravillas de la naturaleza (English: Wonders of Nature).

The dates of the statues are uncertain, but they are believed to have been carved between 50–400 A.D. The origin of the carvers remains a mystery, as most of the site is unexcavated, and no writings have been discovered yet.

The statues vary in height, the tallest being 23 feet (7.0 m) tall. They are suspected to be funereal statuary. In other regions of the archaeological site where large burial mounds are located, you will see more intimidating figures such as snakes, frogs, and birds strategically place to stand guard for increased protecting during the afterlife. Statues of deities or carving on the ground, of both solar gods, males, and lunar gods, females. Theses figures and statues provide researchers with a little insight to what this civilization thoughts and perception of life and death are. 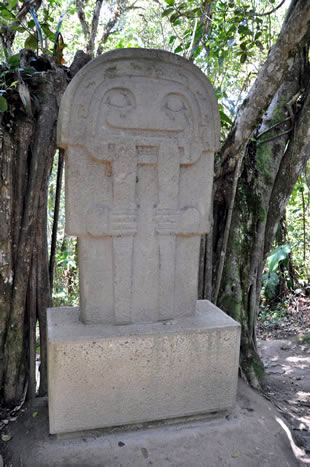 The archaeological park is located in the upper basin of the Magdalena River and its primary tributaries, in the municipality of the town of San Agustin in Huila in the eastern foothills of the Colombian Massif, from which emerge the three Andean mountain ranges traversing the country from south to north in the Andean Region. San Agustín is 520 km from Bogotá. The remains of the ancient cultural groups are scattered over an area of over 50 square kilometers, on plateaus located on either side of the canyon formed by the top of the Magdalena River. The park itself corresponds to a small area with a high concentration of graves and contains more than 500 statues of unknown origin.