Sacsayhuaman (Saksaywaman, Saqsaywaman, Sasawaman, Saksawaman, Sacsahuayman, Sasaywaman or Saksaq Waman; Quechua language, waman falcon or variable hawk, hispanicized spellings Sacsayhuamán, Sacsayhuaman, Sacsahuaman, Saxahuaman and others) is a citadel on the northern outskirts of the city of Cusco, Peru, the historic capital of the Inca Empire. Sections were first built by the Killke culture about 1100; they had occupied the area since 900. The complex was expanded and added to by the Inca from the 13th century; they built dry stone walls constructed of huge stones. The workers carefully cut the boulders to fit them together tightly without mortar. The site is at an altitude of 3,701 m (12,142 ft).

In 1983, Cusco and Saksaywaman together were added to the UNESCO World Heritage List for recognition and protection.

Located on a steep hill that overlooks the city, the fortified complex has a wide view of the valley to the southeast. Archeological studies of surface collections of pottery at Saksaywaman indicate that the earliest occupation of the hilltop dates to about 900 CE. 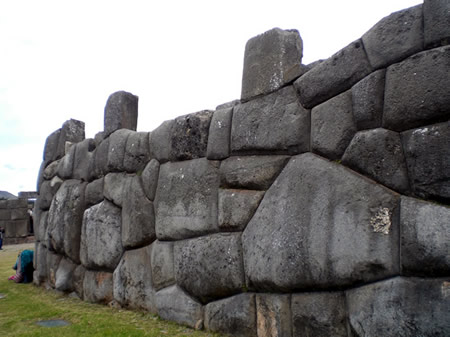 According to Inca oral history, Tupac Inca "remembered that his father Pachacuti had called city of Cuzco the lion city. He said that the tail was where the two rivers unite which flow through it, that the body was the great square and the houses round it, and that the head was wanting." The Inca decided the "best head would be to make a fortress on a high plateau to the north of the city." But archeologists have found that Saksaywaman was built by the preceding Killke culture; it was expanded by the Inca beginning about the 13th century.

After the Battle of Cajamarca during the Spanish Conquest of the Inca, Francisco Pizarro sent Martin Bueno and two other Spaniards to transport the gold and silver from the Temple of Coricancha to Cajamarca, the base of the Spanish. They found the Temple of the Sun "covered with plates of gold", which the Spanish ordered removed in payment for Atahualpa's ransom. Seven hundred plates were removed, and added to two hundred cargas of gold transported back to Cajamarca. The royal mummies, draped in robes, and seated in gold embossed chairs, were left alone. But, while desecrating the temple, Pizarro's three men also defiled the Virgins of the Sun.

After Francisco Pizarro finally entered Cuzco, his brother Pedro Pizarro described, "on top of a hill they [the Inca] had a very strong fort surrounded with masonry walls of stones and having two very high round towers. And in the lower part of this wall there were stones so large and thick that it seemed impossible that human hands could have set them in place...they were so close together, and so well fitted, that the point of a pin could not have been inserted in one of the joints. The whole fortress was built up in terraces and flat spaces." The numerous rooms were "filled with arms, lances, arrows, darts, clubs, bucklers and large oblong shields...there were many morions...there were also...certain stretchers in which the Lords travelled, as in litters." Pedro Pizarro described in detail storage rooms that were within the complex and filled with military equipment.


Because of its location high above Cusco and its immense terrace walls, this area of Saksaywaman is frequently referred to as a fortress. The importance of its military functions was highlighted in 1536 when Manco Inca lay siege to Cusco. Much of the fighting occurred in and around Saksaywaman, as it was critical to maintaining control over the city. Descriptions of the siege, as well as excavations at the site, had recorded towers on the summit of the site, as well as a series of other buildings. For example Pedro Sancho, who visited the complex before the siege, mentions the labyrinth-like quality of the complex and its many storage rooms filled with a wide variety of items. He also notes that there were buildings with large windows that looked over the city. These structures, like so much of the site, have long since been destroyed.

The large plaza area, capable of holding thousands of people, is well designed for ceremonial activities. Several of the large structures at the site may also have been used during rituals. A similar relationship to that between Cuzco and Saksaywaman was replicated by the Inca in their distant colony where Santiago, Chile has developed. The Inca fortress, known as Chena, predated the Spanish colonial city; it was a ceremonial ritual site of Huaca de Chena. 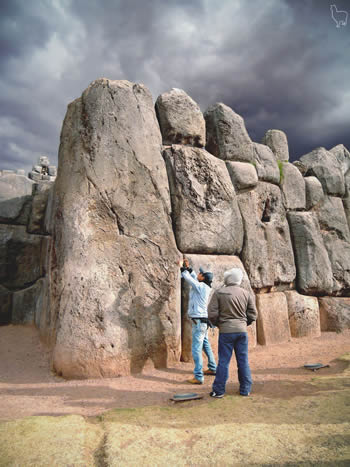 The best-known zone of Saksaywaman includes its great plaza and its adjacent three massive terrace walls. The stones used in the construction of these terraces are among the largest used in any building in prehispanic America. They display a precision of fitting that is unmatched in the Americas. The stones are so closely spaced that a single piece of paper will not fit between many of the stones. This precision, combined with the rounded corners of the blocks, the variety of their interlocking shapes, and the way the walls lean inward, is thought to have helped the ruins survive devastating earthquakes in Cuzco. The longest of three walls is about 400 meters. They are about 6 meters tall. The estimated volume of stone is over 6,000 cubic meters. Estimates for the weight of the largest Andesite block vary from 128 tonnes to almost 200 tonnes.

Following the siege of Cusco, the Spaniards began to use Saksaywaman as a source of stones for building Spanish Cuzco; within a few years, they had taken apart and demolished much of the complex. The site was destroyed block-by-block to build the new Spanish governmental and religious buildings of the colonial city, as well as the houses of the wealthiest Spaniards. In the words of Garcilaso de la Vega: "to save themselves the expense, effort and delay with which the Indians worked the stone, they pulled down all the smooth masonry in the walls. There is indeed not a house in the city that has not been made of this stone, or at least the houses built by the Spaniards." Today, only the stones that were too large to be easily moved remain at the site.

On 13 March 2008, archaeologists discovered additional ruins at the periphery of Saksaywaman. They are believed to have been built by the Killke culture. While appearing to be ceremonial in nature, the exact function remains unknown. This culture built structures and occupied the site for hundreds of years before the Inca, between 900 and 1200 AD.

In January 2010, parts of the site were damaged during periods of heavy rainfall in the region.

Theories About Construction of Walls 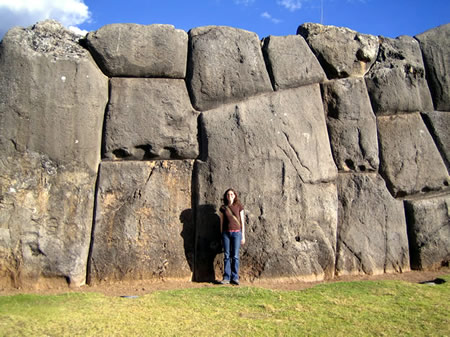 The Inca used similar construction techniques in building Saksaywaman as they used on all their stonework, albeit on a far more massive scale. The stones were rough-cut to the approximate shape in the quarries using river cobbles. They were dragged by rope to the construction site, a feat that at times required hundreds of men. The ropes were so impressive that they warranted mention by Diego de Trujillo as he inspected a room filled with building materials. The stones were shaped into their final form at the building site and then laid in place. The work, while supervised by Inca architects, was largely carried out by groups of individuals fulfilling their labor obligations to the state. In this system of mita or "turn" labor, each village or ethnic group provided a certain number of individuals to participate in such public works projects.

Although multiple regions might provide labor for a single, large-scale state project, the ethnic composition of the work-gangs remained intact, as different groups were assigned different tasks. Cieza de León , who visited Saksaywaman two times in the late 1540s, mentions the quarrying of the stones, their transposition to the site, and the digging of foundation trenches. All this was conducted by rotational labor under the close supervision of Imperial architects.

Jean-Pierre Protzen, a professor of architecture, has shown how the Inca built long and complex ramps within the stone quarries near Ollantaytambo, and how additional ramps were built to drag the blocks to the construction above the village. He suggests that similar ramps would have been built at Sacsayhuaman.

Vince Lee, an author, architect, and explorer who has studied various ancient sites where people moved large megaliths, theorizes that the blocks at Sacsayhuaman were put into place by carving them precisely. The method used to match precisely the shape of a stone with the adjacent stones is unknown; it may have been scribing or by templating. The blocks would be towed up a ramp and above the wall, where they would be placed on top of a stack of logs. The logs would be removed one at a time to lower the stones into place.