Arwad – formerly known as Arados (Greek: Ἄραδος), Arvad, Arpad, Arphad, and Antiochia in Pieria, also called Ruad Island – located in the Mediterranean Sea, is the only inhabited island in Syria. The town of Arwad covers the entire island. It is located 3 kilometres (1.9 mi) from Tartus (ancient Tortosa), Syria's second largest port. Today, it is mainly a fishing town. Plans have been unveiled in May 2016 to renovate the island to become a tourist attraction.

According to the Syria Central Bureau of Statistics, Arwad had a population of 4,403 in the 2004 census. It is the administrative center of the Arwad nahiyah ("subdistrict") of which it is the only locality. Its inhabitants are predominantly Sunni Muslims. 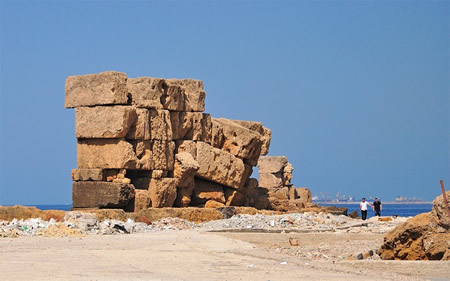 The name Arvad is noted in the Bible as the progenitor of the Arvadites, a Canaanite people.

The island was settled in the early 2nd millennium BC by the Phoenicians. Under Phoenician control, it became an independent kingdom called Arvad Aradus or Jazirat (the latter term meaning "island"). The Phoenician name for the city was probably (Aynook). The city has been cited as one of the first known examples of a republic in the world, in which the people, rather than a monarch, are described as sovereign. In Greek it was known as Arados. The city also appears in ancient sources as Arpad and Arphad. The city was renamed Antiochia in Pieria by Antiochus I Soter. The island was important as a base for commercial ventures into the Orontes valley.

Located some 50 kilometres (31 mi) north of Tripolis, it was a barren rock covered with fortifications and houses several stories in height. The island was about 800 m long by 500 m wide, surrounded by a massive wall, and an artificial harbor was constructed on the east toward the mainland. It developed into a trading city in early times, as did most of the Phoenician cities on this coast. It had a powerful navy, and its ships are mentioned in the monuments of Egypt and Assyria. It seems to have had a sort of hegemony over the northern Phoenician cities, from the mouth of the Orontes to the northern limits of Lebanon, something like that of Sidon in the south. It had its own local dynasty and coinage, and some of the names of its kings have been recovered.


Its inhabitants are mentioned in the early lists of Genesis (10:18), and Ezekiel (27:8,11) refers to its seamen and soldiers in the service of Tyre. It brought under its authority some of the neighboring cities on the mainland, such as Marathos and Simyra, the former nearly opposite the island and the latter some kilometers to the south.

Thutmose III of Egypt took it in his campaign in north Syria (1472 BC), and it is noticed in the campaigns of Ramesses II in the early part of the 13th century BC (Breasted, Ancient Records). It is also mentioned in the Amarna Letters as being in league with the Amorites in their attacks on the Egyptian possessions in Syria (44 and 28, B.M. Tell el-Amarna Letters). About the year 1200 or later, it was sacked by invaders from Asia Minor or the islands, as were most of the cities on the coast (Paton, Syria and Palestine, 145), but it recovered when they were driven back. 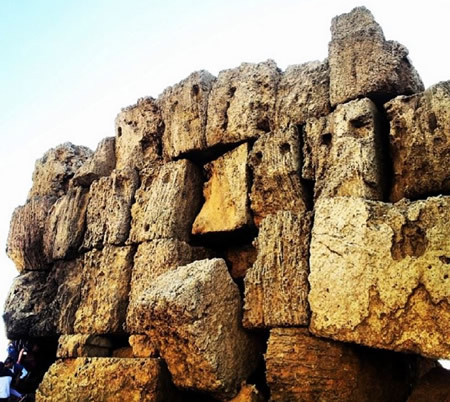 Its maritime importance is indicated by the inscriptions of the Assyrian kings. Tiglath-pileser I (circa 1020) boasts that he sailed in the ships of Arvad. Ashurnasirpal II (circa 876) made it tributary, but it revolted, and 200 men of Arvad were mentioned among the allies of Hadadezer of Aram Damascus at the Battle of Qarqar, when all Syria seems to have been in league against Shalmaneser III (circa 854). At this time the king of Arvad was Mattan Baal. It was afterward tributary to Tiglath-pileser III and Sennacherib, the king who paid it to the latter being Abd-ilihit (circa 701). Ashurbanipal (circa 664) compelled its king Yakinlu to submit and send one of his daughters to become a member of the royal harem (Rawlinson, Phoenicia, 456-57).

Under the Persians, Arvad was allowed to unite in a confederation with Sidon and Tyre, with a common council at Tripolis (ibid, 484). When Alexander the Great invaded Syria in 332 BC, Arvad submitted without a struggle under her king Strato, who sent his navy to aid Alexander in the reduction of Tyre. It seems to have received the favor of the Seleucid kings of Syria, and enjoyed the right of asylum for political refugees. It is mentioned in a rescript from Rome about 138 BC, in connection with other cities and rulers of the East, to show favor to the Jews. This was after Rome had begun to interfere in the affairs of Judea and Syria, and indicates that Arvad was still of considerable importance at that time.

In 458, Atticus signed, as bishop of Aradus, the letter of the bishops of the province of Phoenicia Prima to Byzantine Emperor Leo I the Thracian protesting about the murder of Proterius of Alexandria. Theodorus or Theodosius, who died in 518, is mentioned as bishop of Antaradus in a letter from the bishops of the province regarding Severus of Antioch that was read at a synod held by Patriarch Mennas of Constantinople. The acts of the Second Council of Constantinople in 553 were signed by Asyncretius as bishop of Aradus. At the time of the Crusades, Antaradus, by then called Tartus or Tortosa, was a Latin Church diocese, whose bishop also held the titles of Aradus and Maraclea (perhaps Rachlea).

It was united to the see of Famagusta in Cyprus in 1295. No longer a residential bishopric, Aradus is today listed by the Catholic Church as a titular see. 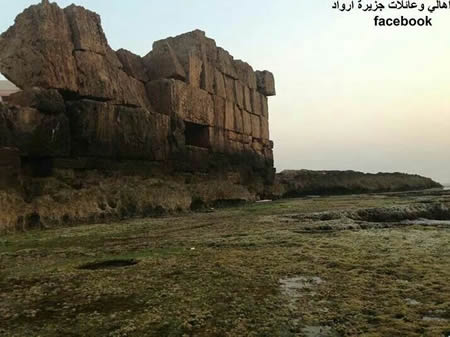 During the later part of the 13th century, in the time of the Crusades, the island of Ruad was used as a bridgehead or staging area by the Crusaders. It was the last piece of land that the Crusaders maintained in the Holy Land, as they were fighting a losing battle against the Muslims.

The Crusaders had lost control of the mainland in 1291 (see Fall of Acre), and the dwindling Kingdom of Jerusalem had been relocated to the island of Cyprus. In late 1300, in an attempt to coordinate military operations with the Mongol leader Ghazan, the Cypriots prepared a land-based force of approximately 600 men: 300 under Amalric of Lusignan, son of Hugh III of Cyprus, and similar contingents from the Templars and Hospitallers. The men and their horses were ferried from Cyprus to a staging area on Ruad, from which they launched raids on Tortosa while awaiting Mongol reinforcements. When the Mongols failed to arrive, the majority of the Christian forces returned to Cyprus, though a garrison was left on Ruad which was manned by rotating groups of different Cypriot forces. Pope Clement V formally awarded ownership of the island to the Knights Templar, who (in 1302) maintained a garrison with 120 knights, 500 bowmen and 400 Syrian helpers, under the Templar Maréchal (Commander-in-Chief) Barthélemy de Quincy.

In February 1301, the Mongols did arrive with a force of 60,000, but could do little else than engage in some raids around Syria. The Mongol leader Kutluka stationed 20,000 horsemen in the Jordan valley to protect Damascus, where a Mongol governor was installed. Soon however, they had to withdraw.

The Egyptian Mamluks, who had been systematically re-establishing control over Palestine and Syria, sought to take Ruad as well. A Mamluk fleet landed a force on the island, engaging in combat with the entrenched Templars, and then establishing a lengthy siege, culminating with the Fall of Ruad, and the Crusaders surrendering on September 26, 1302, following a promise of safe conduct. However, the promise was not honored: all the bowmen and Syrian helpers were killed, and the Templar knights were sent to Cairo prisons.