Pumapunku or Puma Punku (Aymara and Quechua puma cougar, puma, punku door, Hispanicized Puma Puncu) is part of a large temple complex or monument group that is part of the Tiwanaku Site near Tiwanaku, in western Bolivia. It is believed to date to 536AD and later.

Tiwanaku is significant in Inca traditions because it is believed to be the site where the world was created. In Aymara, Puma Punku's name means "The Door of the Puma". The Pumapunku complex consists of an unwalled western court, a central unwalled esplanade, a terraced platform mound that is faced with stone, and a walled eastern court.

The Pumapunku is a terraced earthen mound that is faced with blocks. It is 167.36 metres (549.1 feet) wide along its north–south axis and 116.7 metres (383 feet) long along its east–west axis. On the northeast and southeast corners of the Pumapunku, it has 20-metre (66-foot) wide projections that extend 27.6 metres (91 feet) north and south from the rectangular mound.


The eastern edge of the Pumapunku is occupied by what is called the Plataforma Lítica.. This structure consists of a stone terrace that is 6.75 by 38.72 metres (22.1 by 127.0 feet) in dimension. This terrace is paved with multiple enormous stone blocks. It contains the largest stone slab found in both the Pumapunku and Tiwanaku Site, measuring 7.81 metres (25.6 feet) long, 5.17 metres (17.0 feet) wide and averages 1.07 m (3 ft 6 in) thick. Based upon the specific gravity of the red sandstone from which it was carved, this stone slab has been estimated to weigh 131 metric tons. 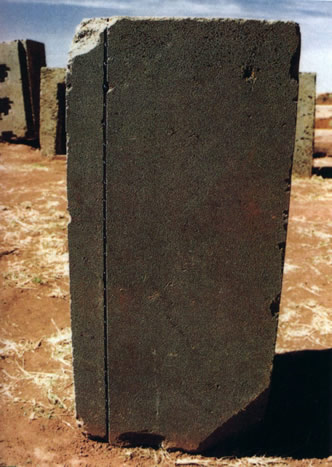 At its peak, Pumapunku is thought to have been "unimaginably wondrous," adorned with polished metal plaques, brightly colored ceramic and fabric ornamentation, and visited by costumed citizens, elaborately dressed priests, and elites decked in exotic jewelry. Current understanding of this complex is limited due to its age, the lack of a written record, and the current deteriorated state of the structures due to treasure hunting, looting, stone mining for building stone and railroad ballast, and natural weathering.

The area within the kilometer separating the Pumapunku and Kalasasaya complexes has been surveyed using ground-penetrating radar, magnetometry, induced electrical conductivity, and magnetic susceptibility. The geophysical data collected from these surveys and excavations have revealed the presence of numerous man-made structures in the area between the Pumapunku and Kalasasaya complexes. These structures include the wall foundations of buildings and compounds, water conduits, pool-like features, revetments, terraces, residential compounds, and widespread gravel pavements, all of which now lie buried and hidden beneath the modern ground’s surface.


Researchers have worked to determine the age of the Pumapunku complex since the discovery of the Tiwanaku site. As noted by Andean specialist, W. H. Isbell, professor at Binghamton University, a radiocarbon date was obtained by Vranich from organic material from the lowermost and oldest layer of mound-fill forming the Pumapunku. This layer was deposited during the first of three construction epochs and dates the initial construction of the Pumapunku to 536–600 AD (1510 ±25 B.P. C14, calibrated date). Since the radiocarbon date came from the lowermost and oldest layer of mound-fill underlying the andesite and sandstone stonework, the stonework must have been constructed sometime after 536–600 AD. The excavation trenches of Vranich show that the clay, sand, and gravel fill of the Pumapunku complex lie directly on the sterile middle Pleistocene sediments. These excavation trenches also demonstrated the lack of any pre-Andean Middle Horizon cultural deposits within the area of the Tiwanaku Site adjacent to the Pumapunku complex. 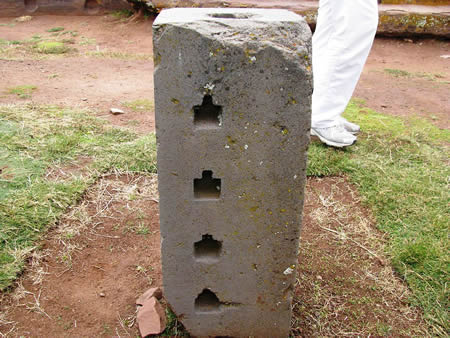 The largest of these stone blocks is 7.81 meters long, 5.17 meters wide, averages 1.07 meters thick, and is estimated to weigh about 131 metric tons. The second largest stone block found within the Pumapunku is 7.90 metres (25.9 feet) long, 2.50 metres (8 feet 2 inches) wide, and averages 1.86 metres (6 feet 1 inch) thick. Its weight has been estimated to be 85.21 metric tons. Both of these stone blocks are part of the Plataforma Lítica and composed of red sandstone. Based upon detailed petrographic and chemical analyses of samples from both individual stones and known quarry sites, archaeologists concluded that these and other red sandstone blocks were transported up a steep incline from a quarry near Lake Titicaca roughly 10 kilometres (6.2 miles) away. Smaller andesite blocks that were used for stone facing and carvings came from quarries within the Copacabana Peninsula about 90 kilometres (56 miles) away from and across Lake Titicaca from the Pumapunku and the rest of the Tiwanaku Site.

Archaeologists argue that the transport of these stones was accomplished by the large labor force of ancient Tiwanaku. Several theories have been proposed as to how this labor force transported the stones, although these theories remain speculative. Two of the more common proposals involve the use of llama skin ropes and the use of ramps and inclined planes.

In assembling the walls of Pumapunku, each stone was finely cut to interlock with the surrounding stones. The blocks were fit together like a puzzle, forming load-bearing joints without the use of mortar. One common engineering technique involves cutting the top of the lower stone at a certain angle, and placing another stone on top of it which was cut at the same angle. The precision with which these angles have been utilized to create flush joints is indicative of a highly sophisticated knowledge of stone-cutting and a thorough understanding of descriptive geometry. Many of the joints are so precise that not even a razor blade will fit between the stones. Much of the masonry is characterized by accurately cut rectilinear blocks of such uniformity that they could be interchanged for one another while maintaining a level surface and even joints. However, the blocks do not have the same dimensions, although they are close. The blocks were so precisely cut as to suggest the possibility of prefabrication and mass production, technologies far in advance of the Tiwanaku’s Inca successors hundreds of years later. Some of the stones are in an unfinished state, showing some of the techniques used to shape them. They were initially pounded by stone hammers, which can still be found in numbers on local andesite quarries, creating depressions, and then slowly ground and polished with flat stones and sand. 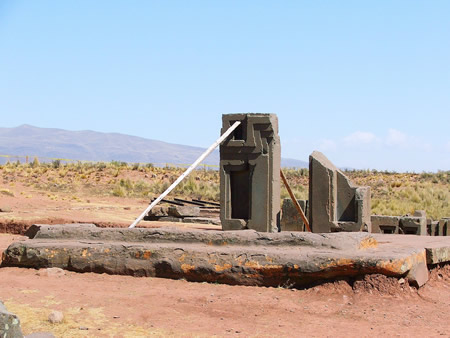 Puma Punku was a large earthen platform mound with three levels of stone retaining walls. Its layout is thought to have resembled a square. To sustain the weight of these massive structures, Tiwanaku architects were meticulous in creating foundations, often fitting stones directly to bedrock or digging precise trenches and carefully filling them with layered sedimentary stones to support large stone blocks. Modern day engineers argue that the base of the Pumapunku temple was constructed using a technique called layering and depositing. By alternating layers of sand from the interior and layers of composite from the exterior, the fills would overlap each other at the joints, essentially grading the contact points to create a sturdy base.

Notable features at Pumapunku are I-shaped architectural cramps, which are composed of a unique copper-arsenic-nickel bronze alloy. These I-shaped cramps were also used on a section of canal found at the base of the Akapana pyramid at Tiwanaku. These cramps were used to hold the blocks comprising the walls and bottom of stone-lined canals that drain sunken courts. I-cramps of unknown composition were used to hold together the massive slabs that formed Pumapunku's four large platforms. In the south canal of the Pumapunku, the I-shaped cramps were cast in place. In sharp contrast, the cramps used at the Akapana canal were fashioned by the cold hammering of copper-arsenic-nickel bronze ingots. The unique copper-arsenic-nickel bronze alloy is also found in metal artifacts within the region between Tiwanaku and San Pedro de Atacama during the late Middle Horizon around 600–900. 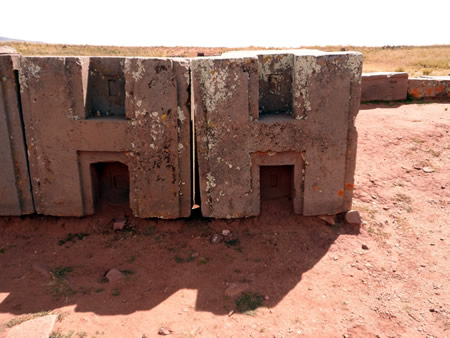 It is theorized the Pumapunku complex as well as its surrounding temples, the Akapana pyramid, Kalasasaya, Putuni, and Kerikala functioned as spiritual and ritual centers for the Tiwanaku. This area might have been viewed as the center of the Andean world, attracting pilgrims from far away to marvel in its beauty. These structures transformed the local landscape; Pumapunku was purposely integrated with Illimani mountain, a sacred peak that the Tiwanaku possibly believed to be home to the spirits of their dead. This area was believed to have existed between heaven and Earth. The spiritual significance and the sense of wonder would have been amplified into a "mind-altering and life-changing experience" through the use of hallucinogenic plants. Examinations of hair samples exhibit remnants of psychoactive substances in many mummies found in Tiwanaku culture from Northern Chile, even those of babies as young as one year of age, demonstrating the importance of these substances to the Tiwanaku.

As was characteristic of civilizations around this time, the Tiwanaku actively incorporated human sacrifice into their culture. The remains of dismembered bodies have been found throughout the area. Ceramic artifacts depict imagery of warriors, masked with puma skulls, decapitating their enemies and holding trophy skulls, and adorned with belts of human heads with their tongues torn out. It is believed that, because of certain markings on stones found at Puma Punku, the Gate of the Sun was originally part of Puma Punku.

The Tiwanaku civilization and the use of these temples appears to some to have peaked from 700 AD to 1000 AD, by which point the temples and surrounding area may have been home to some 400,000 people. An extensive infrastructure had been developed, including a complex irrigation system that extended more than 30 square miles (80 km2) to support cultivation of potatoes, quinoa, corn and other various crops. At its peak the Tiwanaku culture dominated the entire Lake Titicaca basin as well as portions of Bolivia and Chile.

This culture seems to have dissolved rather abruptly some time around 1000 AD, and researchers are still seeking answers as to why. A likely scenario involves rapid environmental change, possibly involving an extended drought. Unable to produce the massive crop yields necessary for their large population, the Tiwanaku are argued to have scattered into the local mountain ranges, only to disappear shortly thereafter. Puma Punku is thought to have been abandoned before it was finished.