The Karnak Temple Complex, commonly known as Karnak, comprises a vast mix of decayed temples, chapels, pylons, and other buildings. Construction at the complex began during the reign of Senusret I in the Middle Kingdom and continued into the Ptolemaic period, although most of the extant buildings date from the New Kingdom. The area around Karnak was the ancient Egyptian Ipet-isut ("The Most Selected of Places") and the main place of worship of the eighteenth dynasty Theban Triad with the god Amun as its head. It is part of the monumental city of Thebes. The Karnak complex gives its name to the nearby, and partly surrounded, modern village of El-Karnak, 2.5 kilometres (1.6 miles) north of Luxor.


The Precinct of Mut is very ancient, being dedicated to an Earth and creation deity, but not yet restored. The original temple was destroyed and partially restored by Hatshepsut, although another pharaoh built around it in order to change the focus or orientation of the sacred area. Many portions of it may have been carried away for use in other buildings.

The key difference between Karnak and most of the other temples and sites in Egypt is the length of time over which it was developed and used. Construction of temples started in the Middle Kingdom and continued through to Ptolemaic times. Approximately thirty pharaohs contributed to the buildings, enabling it to reach a size, complexity, and diversity not seen elsewhere. Few of the individual features of Karnak are unique, but the size and number of features are overwhelming. The deities represented range from some of the earliest worshiped to those worshiped much later in the history of the Ancient Egyptian culture. Although destroyed, it also contained an early temple built by Amenhotep IV (Akhenaten), the pharaoh who later would celebrate a near monotheistic religion he established that prompted him to move his court and religious center away from Thebes. It also contains evidence of adaptations, using buildings of the Ancient Egyptians by later cultures for their own religious purposes. 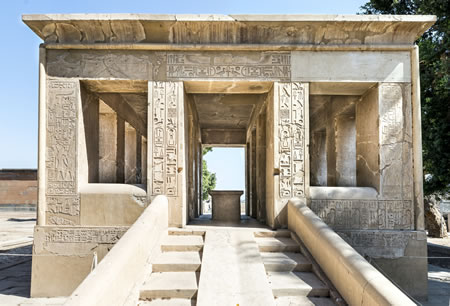 The architraves on top of these columns are estimated to weigh 70 tons. These architraves may have been lifted to these heights using levers. This would be an extremely time-consuming process and also would require great balance to get to such great heights. A common alternative theory regarding how they were moved is that large ramps were constructed of sand, mud, brick or stone and that the stones were then towed up the ramps. If stone had been used for the ramps, they would have been able to use much less material. The top of the ramps presumably would have employed either wooden tracks or cobblestones for towing the megaliths.

There is an unfinished pillar in an out-of-the-way location that indicates how it would have been finished. Final carving was executed after the drums were put in place so that it was not damaged while being placed. Several experiments moving megaliths with ancient technology were made at other locations – some of them are listed here.

In 2009 UCLA launched a website dedicated to virtual reality digital reconstructions of the Karnak complex and other resources.

The sun god's shrine has light focused upon it during the winter solstice.

History of the Karnak Temple Complex

The history of the Karnak complex is largely the history of Thebes and its changing role in the culture. Religious centers varied by region and with the establishment of the current capital of the unified culture that changed several times. The city of Thebes does not appear to have been of great significance before the Eleventh Dynasty and previous temple building here would have been relatively small, with shrines being dedicated to the early deities of Thebes, the Earth goddess Mut and Montu. Early building was destroyed by invaders. The earliest known artifact found in the area of the temple is a small, eight-sided temple from the Eleventh Dynasty, which mentions Amun-Re. Amun (sometimes called Amen) was long the local tutelary deity of Thebes. He was identified with the Ram and the Goose. The Egyptian meaning of Amun is, "hidden" or, the "hidden god".

Major construction work in the Precinct of Amun-Re took place during the Eighteenth dynasty when Thebes became the capital of the unified Ancient Egypt. 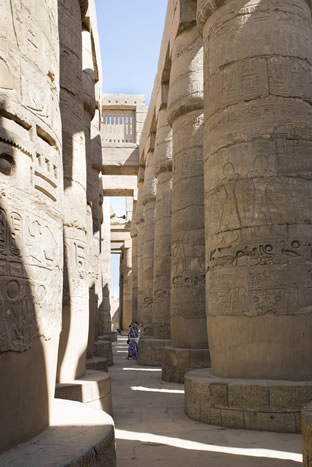 Thutmose I erected an enclosure wall connecting the Fourth and Fifth pylons, which comprise the earliest part of the temple still standing in situ. Construction of the Hypostyle Hall also may have begun during the eighteenth dynasty, although most new building was undertaken under Seti I and Ramesses II.

Almost every pharaoh of that dynasty has added something to the temple site. Merneptah commemorated his victories over the Sea Peoples on the walls of the Cachette Court, the start of the processional route to the Luxor Temple.

Hatshepsut had monuments constructed and also restored the original Precinct of Mut, the ancient great goddess of Egypt, that had been ravaged by the foreign rulers during the Hyksos occupation. She had twin obelisks, at the time the tallest in the world, erected at the entrance to the temple. One still stands, as the tallest surviving ancient obelisk on Earth; the other has broken in two and toppled. Another of her projects at the site, Karnak's Red Chapel, or Chapelle Rouge, was intended as a barque shrine and originally, may have stood between her two obelisks. She later ordered the construction of two more obelisks to celebrate her sixteenth year as pharaoh; one of the obelisks broke during construction, and thus, a third was constructed to replace it. The broken obelisk was left at its quarrying site in Aswan, where it still remains. Known as The Unfinished Obelisk, it demonstrates how obelisks were quarried.

The last major change to Precinct of Amun-Re's layout was the addition of the first pylon and the massive enclosure walls that surround the whole Precinct, both constructed by Nectanebo I.

In 323 AD, Constantine the Great recognised the Christian religion, and in 356 Constantius II ordered the closing of pagan temples throughout the empire. Karnak was by this time mostly abandoned, and Christian churches were founded among the ruins, the most famous example of this is the reuse of the Festival Hall of Thutmose III's central hall, where painted decorations of saints and Coptic inscriptions can still be seen.

This is the largest of the precincts of the temple complex, and is dedicated to Amun-Re, the chief deity of the Theban Triad. There are several colossal statues including the figure of Pinedjem I which is 10.5 meters tall. The sandstone for this temple, including all the columns, was transported from Gebel Silsila 100 miles (161 km) south on the Nile river. It also has one of the largest obelisks, weighing 328 tonnes and standing 29 meters tall.

Located to the south of the newer Amen-Re complex, this precinct was dedicated to the mother goddess, Mut, who became identified as the wife of Amun-Re in the eighteenth dynasty Theban Triad. It has several smaller temples associated with it and has its own sacred lake, constructed in a crescent shape. This temple has been ravaged, many portions having been used in other structures. Following excavation and restoration works by the Johns Hopkins University team, lead by Betsy Bryan (see below) the Precinct of Mut has been opened to the public. Six hundred black granite statues were found in the courtyard to her temple. It may be the oldest portion of the site. 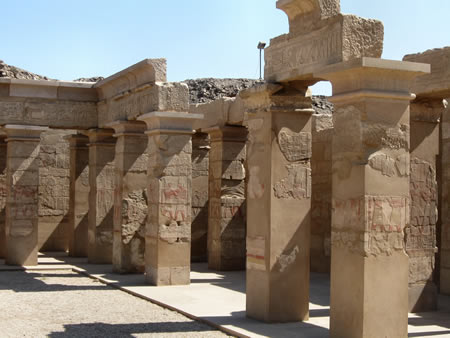 In 2006 Betsy Bryan, an archaeologist with Johns Hopkins University, excavating at the temple of Mut, presented her findings about one festival that included apparent intentional overindulgence in alcohol. Participation in the festival was great, including the priestesses and the population. Historical records of tens of thousands attending the festival exist. These findings were made in the temple of Mut because when Thebes rose to greater prominence, Mut absorbed the warrior goddesses, Sekhmet and Bast, as some of her aspects. First, Mut became Mut-Wadjet-Bast, then Mut-Sekhmet-Bast (Wadjet having merged into Bast), then Mut also assimilated Menhit, another lioness goddess, and her adopted son's wife, becoming Mut-Sekhmet-Bast-Menhit, and finally becoming Mut-Nekhbet.

Temple excavations at Luxor discovered a "porch of drunkenness" built onto the temple by the pharaoh Hatshepsut, during the height of her twenty-year reign. In a later myth developed around the annual drunken Sekhmet festival, Ra, by then the sun god of Upper Egypt, created her from a fiery eye gained from his mother, to destroy mortals who conspired against him (Lower Egypt). In the myth, Sekhmet's blood-lust was not quelled at the end of battle and led to her destroying almost all of humanity, so Ra had tricked her by turning the Nile as red as blood (the Nile turns red every year when filled with silt during inundation) so that Sekhmet would drink it. The trick, however, was that the red liquid was not blood, but beer mixed with pomegranate juice so that it resembled blood, making her so drunk that she gave up slaughter and became an aspect of the gentle Hathor. The complex interweaving of deities occurred over the thousands of years of the culture.

This portion of the site is dedicated to the son of Mut and Amun-Re, Montu, the war-god of the Theban Triad. It is located to the north of the Amun-Re complex and is much smaller in size. It is not open to the public.

The temple that Akhenaten (Amenhotep IV) constructed on the site was located east of the main complex, outside the walls of the Amun-Re precinct. It was destroyed immediately after the death of its builder, who had attempted to overcome the powerful priesthood who had gained control over Egypt before his reign. It was so thoroughly demolished that its full extent and layout is currently unknown. The priesthood of that temple regained their powerful position as soon as Akhenaten died, and were instrumental in destroying many records of his existence.