Luxor Temple is a large Ancient Egyptian temple complex located on the east bank of the Nile River in the city today known as Luxor (ancient Thebes) and was constructed approximately 1400 BCE. In the Egyptian language it is known as ipet resyt, "the southern sanctuary". In Luxor there are several great temples on the east and west banks. Four of the major mortuary temples visited by early travelers and tourists include the Temple of Seti I at Gurnah, the Temple of Hatshepsut at Deir el Bahri, the Temple of Ramesses II (a.k.a. Ramesseum), and the Temple of Ramesses III at Medinet Habu; and the two primary cults temples on the east bank are known as the Karnak and Luxor. Unlike the other temples in Thebes, Luxor temple is not dedicated to a cult god or a deified version of the king in death. Instead Luxor temple is dedicated to the rejuvenation of kingship; it may have been where many of the kings of Egypt were crowned in reality or conceptually (as in the case of Alexander the Great who claimed he was crowned at Luxor but may never have traveled south of Memphis, near modern Cairo.)

To the rear of the temple are chapels built by Amenhotep III of the 18th Dynasty, and Alexander. Other parts of the temple were built by Tutankhamun and Ramesses II. During the Roman era, the temple and its surroundings were a legionary fortress and the home of the Roman government in the area.

Like other Egyptian structures a common technique used was symbolism, or illusionism. For example, to the Egyptian, a sanctuary shaped like an Anubis Jackal was really Anubis. At the Luxor temple, the two obelisks (the smaller one closer to the west is now at the Place de la Concorde in Paris) flanking the entrance were not the same height, but they created the illusion that they were. With the layout of the temple they appear to be of equal height, but using illusionism, it enhances the relative distances hence making them look the same size to the wall behind it. Symbolically, it is a visual and spatial effect to emphasize the heights and distance from the wall, enhancing the already existing pathway. 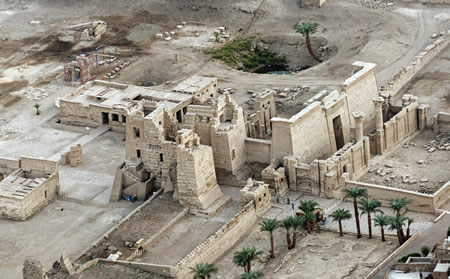 From medieval times the Muslim population of Luxor had settled in and around the temple, at the southward end of the mount. Due to the Luxor’s past city population building on top of and around the Luxor temple, centuries of rubble had accumulated, to the point where there was an artificial hill some 14.5 to 15 metres (48- 50 ft) in height. The Luxor Temple had begun to be excavated by Professor Gaston Maspero after 1884 after he had been given the order to commence operations. The excavations were carried out sporadically until 1960. Over time, accumulated rubbish of the ages had buried three quarters of the temple which contained the courts and colonnades which formed the nucleus of the Arab half of the Modern village. Maspero had taken an interest earlier, and he had taken over the post of Mariette Pasha to complete the job in 1881. Not only was there rubbish, but there were also barracks, stores, houses, huts, pigeon towers, which needed to be removed in order to excavate the site. (There still exists a working mosque within the temple which was never romoved.) Maspero received from the Egyptian minister of public works the authorization needed to obtain funds in order to negotiate compensation for the pieces of land covered by the houses and dependencies.